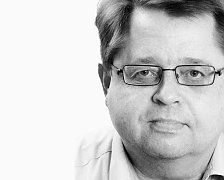 Computer Scientist. Senior researcher at the research unit “Spatial Capital” of the Institute for Work and Technology (IAT) at the University of Applied Sciences Gelsenkirchen.